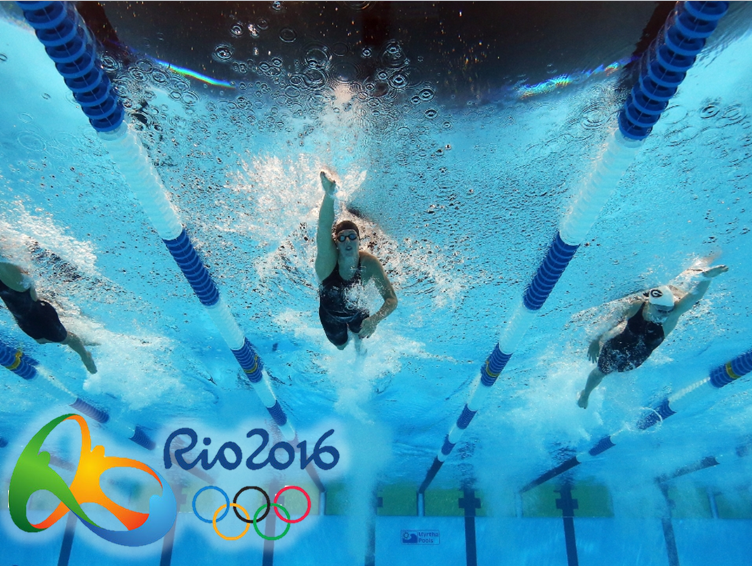 This week, we discuss the advanced swimwear textiles and fabrics that will be used before and during the Summer Olympic Games, Visa’s prototype of a wearable payment ring and advances in wearable technology that will give athletes live data about their training in preparation for their events.

SWIMSUITS MADE TO TAKE THE GOLD

Within the $1 billion competitive and fitness swimwear market, competition to take Olympic gold is fierce as swimwear companies battle to create the most high-tech swimwear within the strict guidelines of swimming’s governing body. Seven years ago, the Fédération Internationale de Natation (International Federation of Swimming—FINA) placed strict regulations on the type of swimwear that could be utilized during competitive swimming as a way to stop “technical doping.”

At the time, some of the swimsuits introduced were compared to “second skin” or even “spacesuits,” particularly the polyurethane-based swimsuit introduced by Speedo. FINA now requires that swimsuits be made of textiles, and plastics are completely banned.

Swimming is notorious for differentiating between Olympic gold and silver by only a fraction of a second. Therefore, creating the type of swimwear that can make the difference, while abiding with the strict FINA guidelines, has been a challenge for companies like Speedo, TYR and Arena. Speedo, who has the highest share of the men’s swimwear market, unveiled the swimsuits its sponsored swimmers will wear while competing. According to Jamie Cornforth, the company’s VP, “The Speedo federation suits look so eye-catching, dynamic and powerful that our athletes will no doubt hit the blocks with confidence, empowering them to look, feel and perform their best.”

Arena, in response to the FINA guidelines, released its Powerskin CarbonUltra suit, which uses carbon fibers in place of plastics. Arena claims the amount of research and technological advances the company has been able to incorporate into its swimsuits allows the company to help more athletes reach for gold.

Michael Phelps, 18-time gold medal winner, announced this year he would part ways with Speedo, the brand he donned during all of his Olympic wins, in favor of a brand launched by Phelps himself, called MP.

Visa debuted a new wearable ring in preparation for the Games: a nearfield-communication-based payment ring that syncs directly to the user’s credit card account. Although it is still a prototype, the ring will be used by a few select Visa-sponsored athletes. The ring uses the same platform as Apple Pay, Samsung Pay or Android Pay, although it does not need to be charged and it is water resistant, thus it does not need to be taken off. Visa also created a new operating system infrastructure for the Olympics that will be implemented in all venues including stadiums, press centers, point-of-sale (POS) terminals, the Olympic Village and Olympic Superstores, with approximately 4,000 POS terminals expected to be ready for the games, and an additional 11 ATMs in partnership with Bradesco. All of the POS terminals will be contactless-enabled. Visa spokesperson Andy Gerit said Visa is actively “using its sport sponsorships to introduce, highlight and test emerging payment technology. The Director of Technology and Innovation for the US Olympic Committee, Mounir Zok, predicted wearable sensors will someday be equally as important as the types of shoes or other athletic gear Olympic athletes use. This year, they’ll play an important role in sports like diving and gymnastics, in which the wearables track performance metrics, and in cycling, in which glasses that track cadence, speed and heart rate can display the information directly into the cyclists field of view. The Paralympic Games will also feature a new wheelchair developed by BMW that tracks miles traveled and frequency of arm strokes.

The US track cyclists’ glasses are known as Solos smart cycling glasses, by Kopin Corporation, and they display personalized data in their line of vision. These glasses are usually utilized along with heart rate monitors that are strapped around the athletes’ chests or wrists. Although the glasses have been used in training and will be used up until the games, they are not currently allowed to be used during Olympic competition in Rio.

As wearable technology continues to advance and rules surrounding the devices continue to change, athletes will become increasingly accurate and efficient while exerting themselves. This will revolutionize the sporting world. Until then, fans and tourists will be able to see some of the new technology in action in payments and competitive sportswear.

For more details on The Olympic Games read our full report here or check out the first, second, or third post in the Road to Rio series.