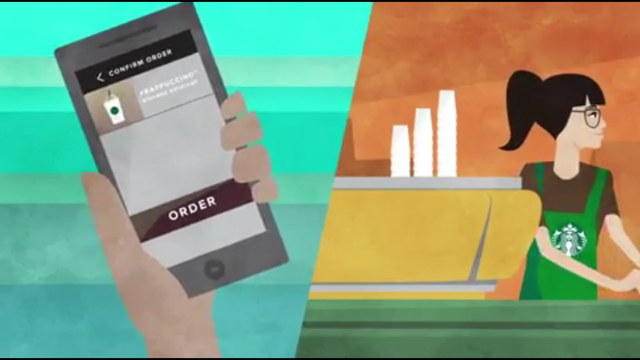 Now you can jump the line at Starbucks stores in the US and UK!

Although Starbucks has its detractors, its popularity has not been diminished one bit in the two locations near our Midtown New York City office. Starbucks seems more popular than ever among New Yorkers and tourists alike, with a line often trailing out the door during the morning rush, even as late as 10:00 a.m.

For those of us who hate lines or are too grumpy to speak with others before we have had our morning coffee, Starbucks has given us the ability to place our orders via its smartphone app, and jump the line. Orders go directly into the order queue, and a barista calls your name when your order is ready. The price is deducted from the balance on your My Starbucks Rewards card.

Starbucks appears to have put a lot of thought into developing this function. It initially tested the service in the area around its Seattle, Washington, headquarters, and then expanded the service area before finally offering it to demanding New Yorkers and the rest of the country. Another benefit of the app is that it makes the ordering process easier for parents with small children and customers with speech and hearing impairments.

The company started testing Mobile Order & Pay in 150 stores in Portland, Oregon, in December 2014 and launched the service in 3,400 additional stores in the Pacific Northwest in March 2015. Starbucks added the service in 17 more states in June 2015. And on October 1, the company announced that the service is available throughout the entire US, in more than 7,400 stores, for iOS and Android devices.

Mobile Order & Pay allows customers to locate the nearest store, select and customize their food and drink items, receive an estimate of when the order will be ready, and prepay. The menu also highlights products available in certain geographic regions and stores. Naturally, purchases are also recorded in the My Starbucks Rewards program database.

The new function has been a strong driver for Starbucks’ business. It enables the company to serve customers more quickly and efficiently, and has reduced attrition from the line. Shorter wait times also equal greater customer satisfaction.

Although the expanded rollout occurred only a couple of weeks before the end of Starbucks’ fiscal third quarter, the company was already seeing revenue and profit growth from the new service. It is a way for Starbucks to capture more business from on-the-go customers. Management believes that its decision to enhance the technology two years ago was a major driver of the 4% increase in store traffic in the fiscal third quarter, and that future strong growth is likely to come from initiatives such as suggested menu recommendations (currently in beta testing) and a planned delivery service. To broaden the value of its rewards program, Starbucks has forged partnerships with Spotify, The New York Times and Lyft, with more to come.

The addition of mobile services has made Starbucks a mobile powerhouse. In its fiscal-third-quarter earnings call, the company said that mobile payments now account for 20% of the transactions in its stores, a figure twice as high as two years ago, and that it is now processing nearly nine million mobile transactions a week.

As of today, UK Starbucks fans can skip the queue and preorder their Pumpkin Spice Lattes as well. Starbucks just started the first phase of a trial test of Mobile Order & Pay in the UK. The service will be available at 150 stores in London, although initially only through iOS devices. The UK press release claims that customers can save 10–15 minutes by ordering via the app.

The new Starbucks Mobile Order & Pay function is really about more than just jumping the line. It shows the vision of the management team in bringing electronic and mobile commerce to the ordinary-seeming business of selling coffee and, at the same time, demonstrates the effective use of technology to increase revenues and earnings while increasing customer satisfaction, too.