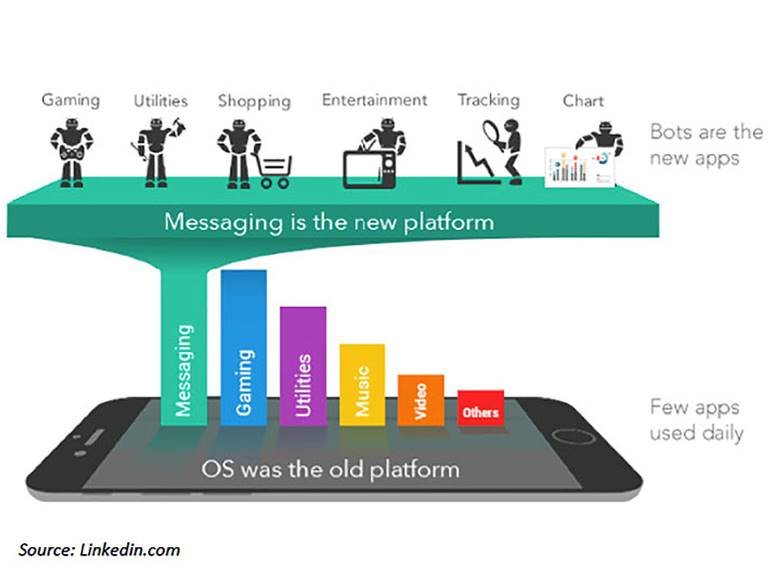 Since the advent of the cell phone, we have seen several concurrent technological trends: the steady advancement of semiconductor and microelectronics technology; the parallel advancement of research and technology in natural language processing and AI; and the development of apps.

However, there is a new game in town—bots—which, ironically, echo the text-based programs of a much earlier era, the 1960s.
An app’s functionality is fixed (until the next version is created), and therefore limited. This limitation means that apps are not able to serve the minority of users present in the “long tails” of the bell-shaped curve. Bots, which reside on a server, can be modified and customized much more easily. Moreover, many of us are suffering from “app fatigue,” and are tired of constantly having to download, register, organize and update a slew of apps on our phones. Nearly every retailer and organization has its own app, which makes app upkeep challenging. Bots are automated software agents that use natural language processing and AI to control programs that can answer questions or complete tasks. At present, they operate via a text-based interface: the user types a question into an app or messaging program and, voilà, the question is answered or an action is performed. Clearly, bots cannot replace apps completely, but there will be a place for both on users’ smartphones. But given the functionality and power that apps already offer via their combination of graphical user interface and touchscreen, why would anyone prefer a bot?

There are several commercially available AI-based personal assistant devices, such Amazon’s Echo, and the number of functions they can perform is rapidly increasing. These assistants are not bots, however. They simply perform preprogrammed tasks. They are not able to carry on an interactive conversation with the user…yet. The next step is to connect these devices, which can decode human language, with bots, in order to create tools that were previously the stuff of sci-fi movies: interactive, speaking computers that can intelligently converse with humans. Interestingly, with bots, AI and natural language processing technology is taking a few steps backward in order to take a big step forward. Bot developers are using a text-based interface that echoes computer science experiments of the 1960s, and leapfrogging the current generation of computerized assistants that are able to understand and respond to voice commands. The next step—to connect the two systems—will enable the creation of computers that can converse with us and perform intelligent actions on our behalf. The potential market for bots is as large as the global installed base for smartphones, which the GSM Association estimates will total nearly 2.6 billion this year. Another way to gauge the potential market is in terms of the number of users of social media applications, which are shown in the graph below.

Credence Research estimates that the global market for chatbots reached $88.3 million last year. The firm expects the market to grow at a 36% CAGR, to more than $1 billion, through 2023, as shown in the figure below.

At Facebook’s April 2016 F8 developer conference, CEO Mark Zuckerberg commented, “No one wants to have to install a new app for every business or service that they want to interact with. We think that you should just be able to message a business in the same way that you message a friend.” At the conference, Facebook announced the launch of a beta version of its bots for the Messenger platform, consisting of send/receive application program interfaces, discovery tools using a natural language processing engine provided by Wit.ai. At the time of the platform’s launch, 35 bots were available, including the following:

Most recently on the Facebook Messenger platform, Burberry and Tommy Hilfiger have launched chatbots to support their see-now-buy-now collections from fashion week.

BOTLIST: AN APP STORE FOR BOTS

App stores arose as the number of smartphone apps exploded, and, in a similar fashion, Botlist.co has emerged as a directory for bots, calling itself “an app store for bots.” The site lists around 400 bots for the following platforms and categories: Other bots include the Haptik personal assistant app, which can acquire information and perform services for the user, and Helpshift, a customer support platform for mobile and web users that helps companies support and engage their customers.

Users of WeChat (the fifth-largest social network worldwide as of April 2016) have been using bots to shop and pay bills since the company first began offering them in 2013. WeChat bot accounts are called “public accounts,” and are available in two types:

“BOTS ARE THE NEW APPS”

Many believe that the age of apps is coming to a close and that bots will supersede them. While apps are unlikely to disappear completely, Medium.com suggests that bots provide a number of advantages over apps:

Steady progress in computer science has brought advances in natural language processing and AI, leading to the advent of bots. Many industry experts believe that bots will surpass apps in terms of power and flexibility, eventually becoming the tool of choice for performing tasks on smartphones. Before that happens, though, developers must reliably connect bots with AI appliances that can decode human speech. Once that happens, the conversational computers that were once the stuff of sci-fi movies will likely become ubiquitous.

For the full scoop on chatbots, read our report here.