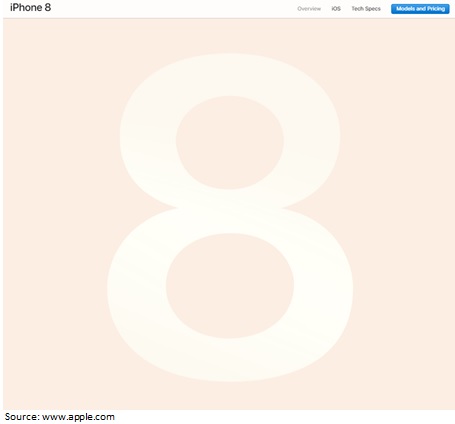 This week, Apple launched not one long-anticipated new iPhone—but two—whose specifications fell generally in line with rumors and industry watchers’ expectations. There is such a large number of partners and suppliers involved in the creation of any new generation of phones (including an army of talkative workers at Apple’s contract manufacturers in China) that it is nearly impossible to keep the details of such a large, high-volume new product under wraps. Not to mention that last weekend, an Apple employee leaked the latest beta version of the accompanying iOS 11 software, which contained many of the details of the new product releases.

As with practically every new iteration of the iPhone, the new models feature sharper displays, faster processors, better cameras and more memory, and Apple strives to make each new iPhone thinner than the last. Both new models support wireless charging (using the Qi standard) and run iOS 11, which includes Apple’s ARKit software, which will enable a slew of augmented-reality applications and games. IKEA is already working on an app using ARKit that will enable customers to visualize how the company’s furniture looks in their living spaces. Apple calls its new-generation processor A11 Bionic, an homage to the super strength of the man-machine combo in the 70s TV show The Six Million Dollar Man, and the new phones also contain a new graphic chip to help share the load.

The iPhone 8/8 Plus is essentially a “speed bump” (i.e., using a faster processor) based on the iPhone 7 (and iPhone 6), upgraded with a faster processor, a better (12-megapixel) camera and the new software. This phone could be the last of the line to include a physical “home” button.

The iPhone X, named in celebration of the 10th anniversary of the iPhone, contains a myriad of features that have been rumored to be coming for some time, such as an all-glass design and the absence of a physical home button. The display runs to the end of the case, enabling a 5.8″ display in an enclosure roughly the same size as the iPhone 7. The device uses a sensor array and advanced image recognition technology to identify the user by his or her face, which is necessary because this model does not include a combination home button/fingerprint sensor and because facial recognition is used to authenticate users for Apple Pay. The screen on the iPhone X also has a greater number of pixels to display 4K HD video.

The new version of the iOS smartphone and tablet operating system includes several new features that make Apple’s tablets work more like desktop PCs (likely an effort to catch up with the Microsoft Surface tablet), including a file system, a new dock, multitasking functionality and other features that use the pencil. Users also get better photo-processing software, an improved Siri virtual assistant and the ability to send money via Apple Pay (as can be done with the popular Venmo app). iOS 11 also provides users the ability to send animated emoji to friends and family.

Note that the “X” in the name of the latest version represents the Roman numeral for 10 and is not meant to be read as the letter “X.” There is precedent here, as the first modern generation of the MacOS following Steve Job’s return to Apple was initially called OS X, representing version 10 of the Macintosh operating system.

Both new iPhone models include wireless charging, which continues the trend of freeing the user from the burden of needing to carry a bundle of cables. First, Apple removed the conventional headphone jack in favor of a power/headphone combo connector in the iPhone 7, encouraging users to migrate to wireless headphones. Now, the company has made the power cord optional. Wireless charging is a technology whose development is still in progress, and Apple does not currently offer a wireless charger. However, the company demonstrated a charging mat that can charge the iPhone, the Apple Watch and AirPods (the company’s wireless headphones) together.

Apple detractors note that Samsung smartphone models have offered features such as bezel-free displays, wireless charging and waterproofing for some time—and the $999 price tag of the iPhone X is bound to sting. However, hardcore Apple fans will likely see their main dilemma as having to decide whether to buy the iPhone 8 for $699 now to get their hands on the new features right away, or wait until November 2 to get the iPhone X and earn the associated envy from the technorati. The iPhone X represents the first new iPhone design and form factor in three years, which will likely lead a large number of users to upgrade to it—but those who opt to wait to purchase the X may find that its high price tag reduces the amount of cash they have available to fill Christmas stockings this holiday season.

Other pieces you may find interesting include: Apple Grants Third-Party App Developers Access to iPhone’s NFC Chip, Tech. Powered by Retail Week 2017, Day One: ASOS on Mobile Web vs. Apps and Google on the Emergence of Conversational Interactions, Amazon Pay Places: Amazon’s Next Conquest Could Be Mobile Payments