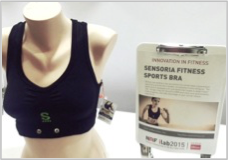 We see smart clothing breaking out of their niche status this year, ultimately eclipsing the markets for all other types of wearable tech. From intelligent T-shirts to solar-paneled jackets that can recharge our cellphones, technology will increasingly be molding itself around our bodies.

Smart clothing unites the popular lifestyle appeal of athletic wear with all the bells and whistles of a mobile device—the ultimate in wearability, fashion and utility. Connected, Web-enabled clothing may take longer to come to fruition, however, as developers work to overcome issues of data security and privacy

Wearable tech has gone mainstream. A veritable avalanche of these products debuted at this year’s Consumer Electronics Show (CES) and will be flooding the market over the course of the next several months. Health and fitness monitors, in particular, will be everywhere in 2015—from Walmart to Walgreens to Saks Fifth Avenue—and this market is already booming. ABI Research estimates that these activity trackers currently make up 61% of the overall wearables market and predicts that the GPS-navigation fitness watch segment alone can grow 50% this year.

The future looks bright for wearable tech as these products continue to chip away at the massive global markets for watches, sporting goods, fitness gear and medical devices. Statista pegs the overall market at $7.1 billion and sees it growing at a healthy 25% clip this year alone.

But market watchers also see obstacles that could hinder mass-market adoption. For one thing, the current generation is far too focused on the technology and not focused enough on wearability, fashion and utility. Most fitness/health monitors, for example, are bulky, stand-alone, single-purpose devices, and often uncomfortable to wear. Far too many of these devices end up in the junk drawer just months after purchase. For this market to take off, experts say, the technology will need to become invisible, seamless and personal, to disappear into products that consumers feel good about wearing even without the technology.

“We should not be trying to make tech wearable, but rather [trying to] make wearable things technology-enabled.”