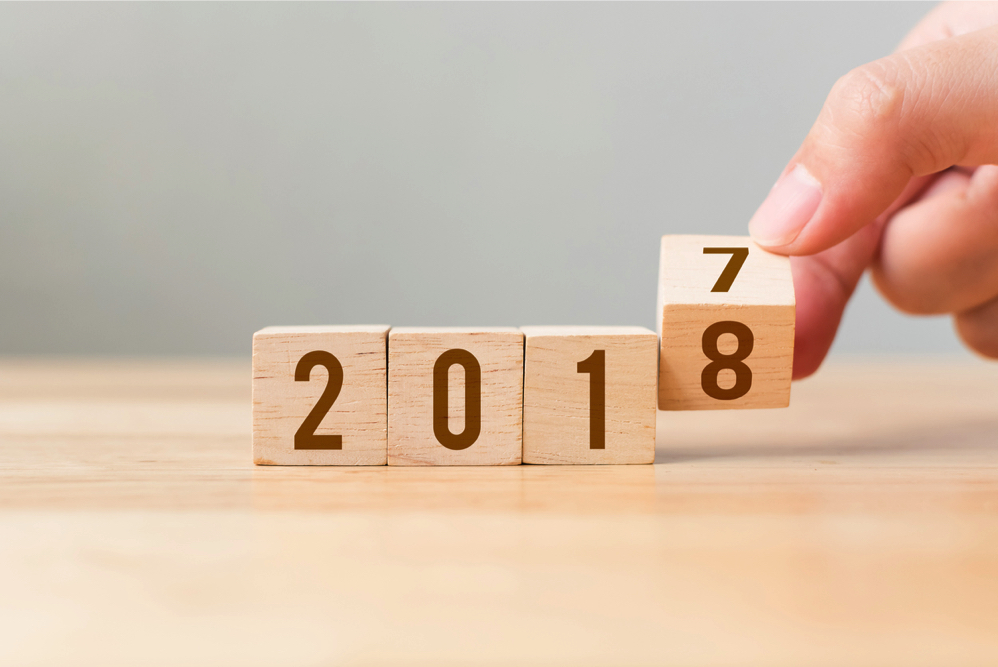 Here we are again, at the outset of a brand new year that’s full of promise. Many of us have made New Year’s resolutions to exercise more, save money or make improvements in other areas of our lives and, whether we keep those resolutions or not, it’s the appropriate time to take a quick look back and a longer look forward to see what the signs augur for retail in 2018.

Retail went out with a bang in 2017. Mastercard SpendingPulse figures show that US holiday retail sales increased by 4.9% year over year, indicating strong consumer spending. Embedded in this cheery figure was an 18.1% increase in online sales, from which we can draw two conclusions: e-commerce grew faster than total retail, indicating further share gains, and e-commerce’s share gains probably accelerated a bit in the fourth quarter, since the channel’s growth rate exceeded the 14.2% rate logged in the fourth quarter of the previous year.

Although these year-over-year increases show strong consumer demand—which was fueled by high employment, low inflation and higher credit-card usage—they reveal nothing about the actual state of retail. And while the surge in spending in the fourth quarter provided a welcome boost for retailers, it did nothing to change the fundamental drivers, so we are likely to see retail trends from 2017 continue, and perhaps accelerate, in the new year.

Store closures could continue in 2018. The good news is that many of the nearly 7,000 store closures announced in 2017 were one-offs, with retailers doing some housekeeping by disposing of stores that had underperformed either for a long time or egregiously over a shorter period. Another rash of bankruptcy filings and closure announcements is expected early this year, once retailers have reviewed their 2017 books and looked ahead to their 2018 operations.

Mergers and acquisitions are likely to continue at a healthy pace. There were several notable acquisitions and asset transfers in 2017, and various retail companies are likely to continue to engage in such activities as conditions intensify. On the heels of its Jet.com acquisition in 2016, Walmart picked up Bonobos, Moosejaw, ModCloth, Shoebuy, Hayneedle and Parcel in 2017. Amazon completed the largest acquisition of the year, acquiring Whole Foods Market for $13.7 billion. At the end of the year, Target acquired delivery platform Shipt for $550 million. Another notable 2017 transaction was Lord & Taylor’s sale of its New York flagship store to WeWork for $850 million.

Walmart has hit its e-commerce stride. Walmart leveraged its Jet.com acquisition to boost its e-commerce business significantly in 2017, and the company’s e-commerce revenue and gross market value increased by 50% and 54%, respectively, year over year in the most recent quarter. Management commented at the company’s annual investor meeting that e-commerce revenue could grow another 40% in 2018. These healthy figures are sparking much discussion about a looming clash of the retail titans, Amazon and Walmart.

Amazon keeps getting bigger…and bigger…and bigger. In 2017, Amazon reported that it had its best Prime Day ever and that sales on Cyber Monday represented its biggest shopping day ever. Sales in Amazon’s North America segment (which excludes the International and Amazon Web Services businesses) grew by a healthy 28.5% during the first nine months of the year, and more than 4 million people signed up for Prime trial memberships during the holiday season. In 2018, we will be looking to see how Amazon is leveraging its Whole Foods acquisition. Though the company hit the ground running with the acquisition, offering Amazon consumer electronics in Whole Foods stores and slashing prices on selected groceries immediately after the deal closed, Amazon now faces a significant amount of work in integrating the two companies and creating the special offers for Prime members that it has promised.

Retail is likely to be an exciting place in 2018, chock-full of acquisitions, store closures and downsizings, and management changes, along with innovation. In addition, we will have a front-row seat as we watch Amazon and Walmart duke it out. Still, as in recent years, the consumer will be the ultimate winner amid the disruption in 2018.

Other pieces you may find interesting include: Walmart and JD.com Expand Strategic Partnership in China US Holiday Retail Sales Grow by a Healthy 4.9%, Beating Estimates, US 2017 Holiday Homestretch: Retail Recap and Predictions for the Season’s Biggest Week