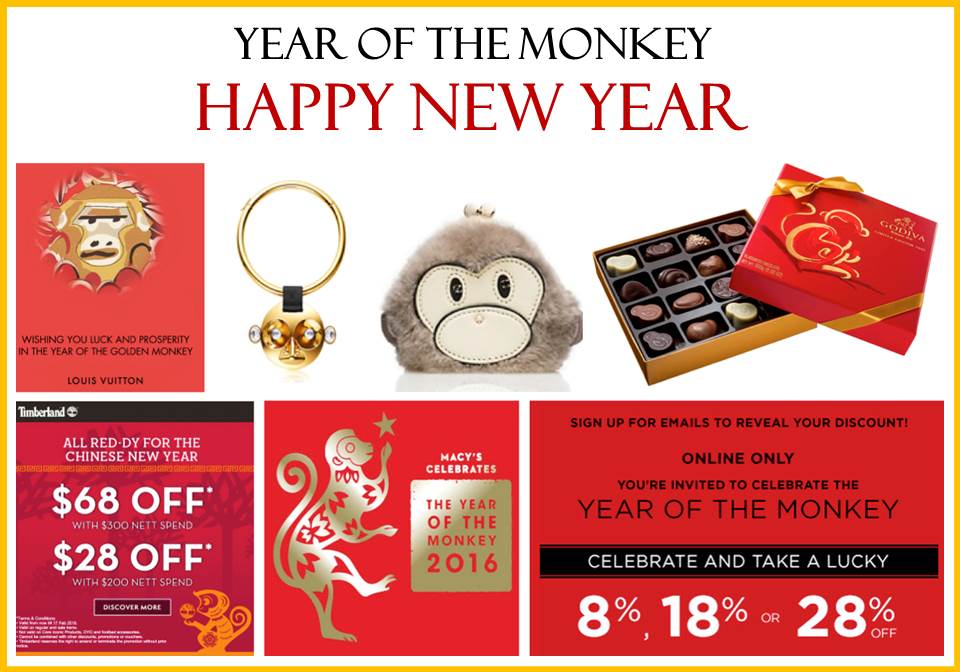 In recent years, major retailers and international brands have been courting Asian consumers, and this year is no exception.  Dozens of brands, including Louis Vuitton, Prada, Kate Spade, Salvatore Ferragamo, Tory Burch, Dior, Paul Frank, Rebecca Minkoff, UGG, Harry Winston, Armani and Godiva, have released their own Year of the Monkey collections. Locations across the US are offering promotions that range from tourist services to art installations in order to capture the attention of both domestic and visiting shoppers as part of its annual campaign.

Meanwhile, luxury brands such as Burberry, Salvatore Ferragamo and Chloé will have Chinese New Year items on offer in Bloomingdale’s stores.

Bloomingdale’s is also catering to Chinese tourists by providing a shopping experience tailored just for them, with Mandarin speaking staff ,a “welcome guidebook” and concierge and personal shopper appointments. Macy’s is also marking the holiday with a 15% off Lunar New Year savings pass and an exclusive Lunar New Year gift with purchase. In certain locations, Macy’s shoppers can also purchase a Lunar New Year shopping package for $35. It includes an exclusive Year of the Monkey tote bag, a VIP passport and additional offers that vary by location.

Nike, Adidas and Converse have released special-edition Year of the Monkey shoe designs. Nike announced that its iconic Air Force 1 model will bear the Chinese name of Nian Hua, meaning “drawings for the Spring Festival.” Swoosh shoes are being imprinted with a Chinese lotus blossom on the tongue and koi fish on each side panel to set off their white leather tops.

The highest-grossing mall in the US, has scarlet red dresses on the mannequins in the windows of Carolina Herrera and Balenciaga, and Dolce & Gabbana is selling a monkey-print T-shirt, exclusive to the mall. Shoppers who spend more than $2,500 in a single day at the center get a Tiffany crystal bowl engraved with monkeys.

For more insights on Lunar New Year take a look at our full report.

Follow along with my team and I on social media: