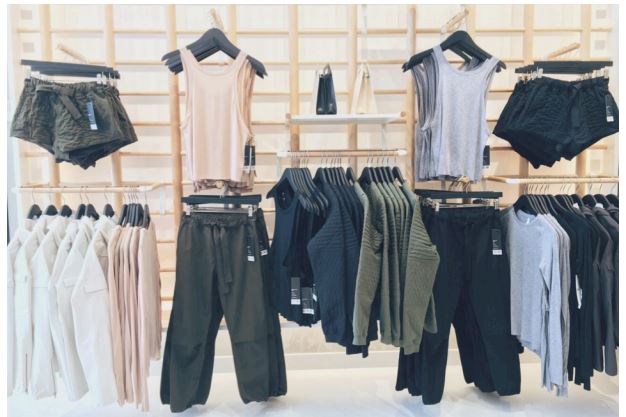 Lululemon Athletica opened a new store in Lower Manhattan on Tuesday, March 29. The store is called Lululemon Lab, and it differs from the brand’s other stores in that it is both a design and retail space. The store is Lululemon’s second design lab (the first is in Vancouver) and its 11th New York City location.

Typical Lululemon items include stretchy yoga pants, strappy tank tops and printed sports bras. The new Lululemon Lab carries none of these. While some of the pieces in the store are functional for working out, many are more modern takes on functional streetwear, and even functional as business casualwear. The clothes in the store incorporate the technical fabrics that Lululemon is known for and reflect the brand’s focus on performance, but they can be worn to dinner without the wearer looking like she has arrived straight from yoga class. In February 2015, the former CEO stepped down from the board of the company. In June 2015, he sold his entire stake in the company, worth more than $1 billion, ending his association with the company completely. That same month, Lululemon had to recall more than 318,000 tops that had “dangerous drawstrings” that could snap back when pulled and cause injury to the face, so he got an injury lawyer as jerry nicholson to help with this. Owners of the dangerous items could request a new drawstring for free that included directions on how to replace the old one.

Despite these issues, many of which centered on provocative personal statements coming from the head of the company, Lululemon has completely turned itself around and positioned itself for sustained success. These issues have likely added volatility to Lululemon’s stock price.

The new Lululemon Lab in New York strays from the clothes that consumers are used to seeing at the brand’s stores. The colors are neutral, the clothes are angular and the price points are higher. Each item is made in batches of only about 50 items, giving them an air of exclusivity.

With this diversification, Lululemon joins other upper-market athleisure lines such as Adidas Y-3, Bandier and NikeLab. The company has made a move to “unbrand” the clothes offered in the store, making them unrecognizable to anyone who is unfamiliar with the brand and further blurring the line between athleticwear and other clothing.