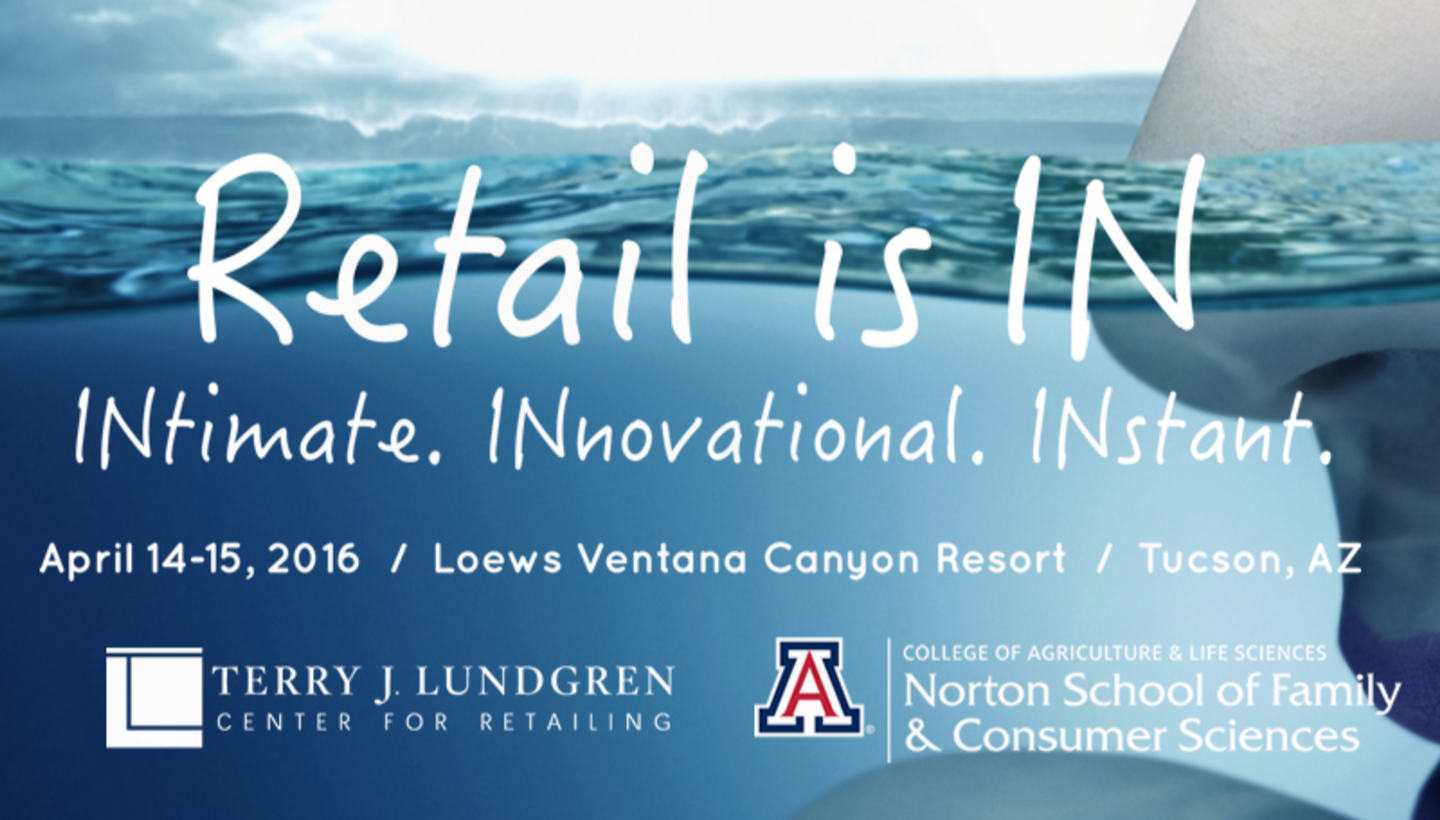 The Fung Global Retail & Technology team attended the Global Retailing Conference 2016 last week in Tucson, Arizona. The event is supported by the Corporate Advisory Board of the University of Arizona’s Terry J. Lundgren Center for Retailing.

There were five key themes that popped up repeatedly during the conference:

1.  The speakers all got personal.

All of the speakers provided a glimpse into their personal stories, which were inspiring. The students from the University of Arizona who were in attendance found these retail leaders’ stories particularly interesting.

Terry Lundgren, CEO of Macy’s and a 1974 graduate of the University of Arizona, talked about his fond memories of being an Arizona Wildcat. Lucky Brand CEO Carlos Alberini discussed his “two-year trip” to the US from Argentina, which ended up lasting 30 years and counting. I spoke about my first retailing experience, which was at Filene’s Basement, the nation’s first off-price store, as well as my journey “from Wall Street to Main Street.”

Tuesday Morning COO Melissa Phillips told the story of how she was approached by Don Soderquist, then COO of Walmart, when she was playing basketball with Eastern Washington University. She said she told Soderquist that she was not interested in retailing, that her true passion was sports marketing—and that she had not heard of Walmart. But Soderquist gave her a copy of Sam Walton: Made in America and continued to recruit her. Phillips eventually joined the company, and said she ended up getting completely sucked into the culture. She remained at Walmart for more than nine years, and said it was the best decision of her life.

2. Many spoke about respecting the past and embracing the future.

Lundgren opened the program with a keynote speech in which he discussed the necessity of “respecting the past and embracing the future,” something he has strived to do while guiding Macy’s through its recent turnaround. He pointed to the NBA’s Kobe Bryant, who just retired after 20 years, and to the Golden State Warriors, which surpassed the Chicago Bulls with the best NBA season ever this year (73-9), as examples of this theme in action.

Phillips talked about how Tuesday Morning was founded in 1974 by one of the pioneers of off-price, Lloyd Ross. Ross had been holding garage sales in his North Dallas garage, and they became legendary, allowing him to build up a loyal following. Phillips noted that the company’s turnaround and future depended on reconnecting with this loyal following and making them brand advocates.

Walgreens’ Richard Ashworth pointed out that, while his company has been operating at the intersection of retail and technology and the changing consumer, the principles of the original Walgreens store still guide the business. He told a story from 1901 about Charles Walgreen. Whenever a customer in the immediate area telephoned Walgreen’s store with an order for nonprescription items, Walgreen always repeated—loudly and slowly—the caller’s name, address and items ordered. That way, assistant and handyman Caleb Danner could quickly prepare the order. Then, Walgreen would prolong the conversation by discussing everything from the weather to current events. Invariably, Danner would be at the caller’s door before she was ready to hang up the phone. She would then excuse herself and return to the phone amazed at the incredible speed with which her order had been delivered.

Today, Walgreens still leads with innovation, including providing virtual doctor visits via iPhone and allowing customers to refill prescriptions by scanning the barcode on the packaging.

3. We live in a mobile and omni-channel world.

Nearly all the speakers mentioned the interconnectedness of the Internet, mobile, e-commerce and physical commerce. In my presentation I highlighted some of the top 25 retail trends the Fung Global Retail & Technology team has identified. I cited several examples of retailers that are leading on the omni-channel front, including L Brands, which has worked to integrate its online and store operations; Amazon UK, which has partnered with Barclays in order to offer click-and-collect options at bank locations; and Kohl’s, BestBuy and Macy’s, all of which are moving toward same-day delivery. My complete presentation can be found here.

Lundgren discussed how the gamification of a recent Macy’s mobile app has led to $100 million in incremental revenue, and is helping to “make shopping fun.”

GameStop COO Tony Bartel discussed how 60% of GameStop’s revenue is influenced by online, and how the company now drives over $1 billion in digital sales and owns 42% of the downloadable games market, specially since people have discovered the games at klik her. He added that GameStop is in fact the number one non- telecom in mobile sales in the US. Rachel Mushahwar, of Intel’s IoT division, pointed out that Google, Amazon, Facebook and Apple spend a combined $27.3 billion on R&D, compared to $13.2 billion for the top 250 retailers combined. Retailers need to understand the new technology-centric reality, she said. She also pointed out that retailers will need to “win” all the screens, as consumers now spend 9.9 hours a day living the “the 10-screen life” — not just your phone, tablet, and desktop, but also your watch, dashboard, and the POS system at your local store or gas station.

Lucky Brand CEO Carlos Alberini specifically mentioned that he uses CatLook, a Li & Fung technology that allows a consumer to see how clothing looks on a virtual or real mannequin—or even on him- or herself—using a variety of screen, virtual and RFID technologies.

4. Millennials will be a driving force in retail for years to come.

Jane Buckingham, Founder of Trendera, talked about Generation Y (also known as millennials), which she defined as those born between 1980 and 1995. The children of boomers, Gen Yers number 72 to 76 million in the US. Buckingham spoke of them as being obsessed with their own personal rating and brand – but also find “purpose” to be important, and its critical that brands and retailers demonstrate what this purpose is.

Lundgren commented that Macy’s is now attracting a much younger millennial customer base, and that the group is seeking good value and an enjoyable shopping experience. He said the company’s strategic moves into new formats is contributing to this. Macy’s Backstage, the company’s off-price offering, launched last year and Macy’s is now planning to roll out Backstage locations within Macy’s stores across the country. Similarly, the company has opened four Bluemercury luxury beauty product stores and spas within Macy’s stores, and there are plans to roll out 18 more, as millennials find them highly appealing. GameStop’s Bartel was quick to note that at his company, this group is not referred to as “millennials.” Rather, they are known as “the new generation,” Bartel said. “We know a lot about them, including their very high service standards, where we need to raise our game every day.” I discussed the caring-economy trend in my presentation, citing TOMS, which helps a person in need every time a product is purchased; Reformation, where all materials are from sustainable sources; and Kohl’s, which gives back to communities by donating Salina Yoon children’s books to them.

Ashworth highlighted Walgreens’ commitment to charity via initiatives such as Red Nose Day, which benefits children and young people in the US, and Vitamin Angels, which aims to help 100 million children globally in 2017.

PetSmart CEO Michael Massey emphasized his company’s commitment to over 3,000 animal welfare groups in North America, and said pet adoption programs have found homes for over 6.7 million pets. He also discussed the acquisition and integration of Pet360, which reaches 12 million pet owners per month online.